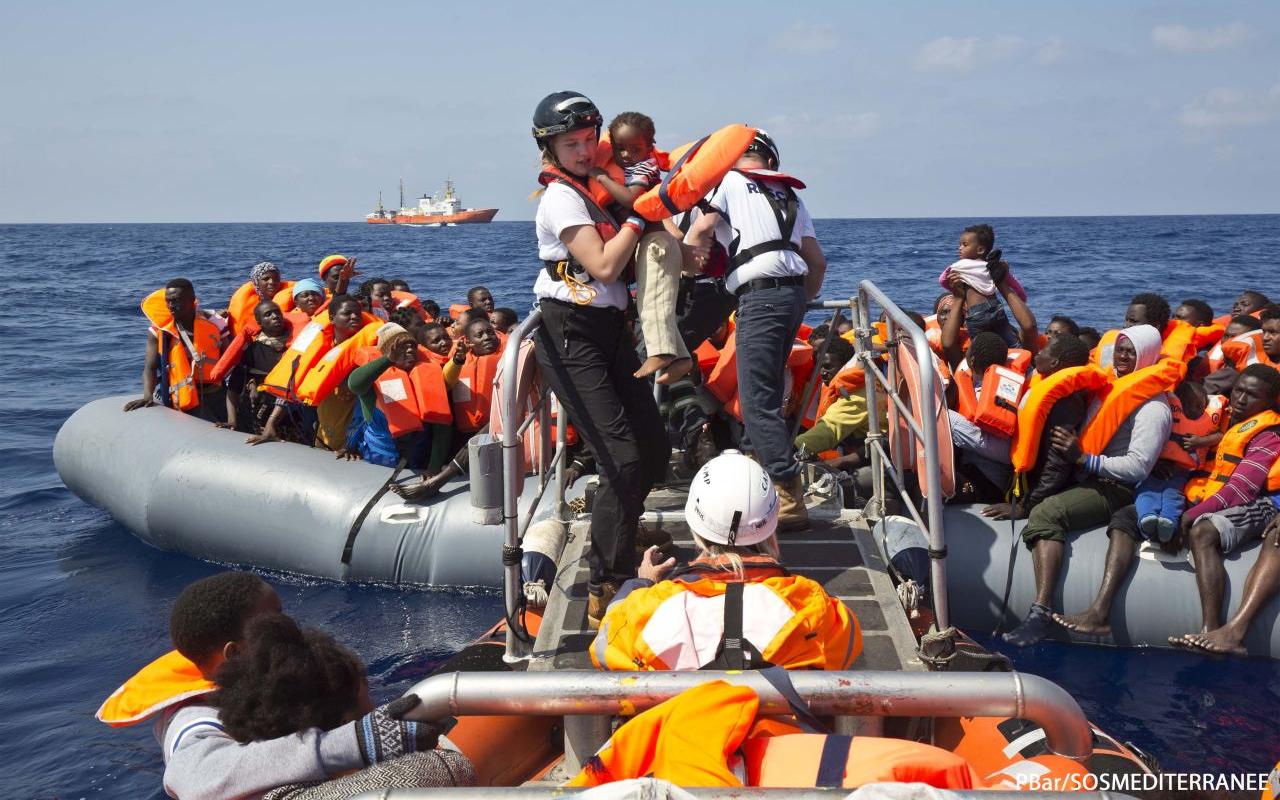 The Aquarius crew during a rescue operation in the Mediterranean (Photo: PBar/SOS MEDITERRANEE)

The Mediterranean has become one of the main escape routes for refugees to Europe. And one of the most dangerous and deadly: according to UNHCR, statistically six people per day, or a total of more than 2,100, drowned in the Mediterranean Sea in 2018. However, the number of unreported cases is much higher. "Thousands of people are fleeing war and violence and dying because Europe looks the other way. It is our humanitarian duty to help these people. This is why we support SOS MEDITERRANEE", said Ingrid Lebherz on February 4, 2016, when she bid farewell to the Aquarius in Bremerhaven. Until October 2018 the Aquarius was in international waters off the coast of Libya. Since August 2019 the team is at sea with the rescue ship Ocean Viking.

We are urgently needed there!

Week after week the team of Aquarius - now Ocean Viking - is saving lives. The balance since February 2016: In countless rescue operations more than 19,000 people have been rescued from acute distress at sea and more than 30,000 people have been cared for on board. Several babies were born on board of the Aquarius (as of December 2019). "The refugees on the inflatable boats are severely weakened and hypothermic. They can survive at sea for about 13 to 15 hours, then the risk of dying is very high. With our special equipment and a well-trained 35-man crew, we are able to carry out rescues in complicated situations," says rescue coordinator Nicola Stella.

On board, the refugees receive medical and psychological care. They report on the background of their escape, about the crossing on overcrowded and unseaworthy boats, hardly any of which would make it to Italy, and they talk about the horrors they experienced in Libya. They are stories of horror, representative of the suffering of many. War, violence, persecution, poverty and lack of prospects are the main reasons for flight. Many people see no other way out than to risk their lives and try to come to Europe. Once in Libya, people experience the most terrible phase of their flight. They are kept there like slaves. They are exploited, blackmailed, beaten, raped - or simply killed. "I am relieved that we were able to save people, but at the same time I am deeply shocked by what the fugitives had to suffer", says Klaus Vogel, founder of SOS MEDITERANEE and former captain of MS Aquarius.

Sea rescue is not a crime

The discussions about civil sea rescue are not diminishing: humanitarian aid worker are defamed and criminalized, rescue ships of numerous civil society organizations are detained or confiscated by the authorities - and thus prevent people from being rescued at sea. With consequences: In June 2018 alone, more than 600 people drowned.

The accusations that the private rescuers at sea are playing into the hands of the smugglers are proving groundless. The so-called pull effect - i.e. that more people flee or are encouraged to flee as a result of the civil sea rescue - has also been refuted, for example, by a study by Oxford University or the study "Blaming the rescuers" by the Forensic Oceanography initiative based at the University of London. Civil sea rescue is not a cause of people fleeing, but a reaction to the mass deaths in the Mediterranean. It is also a reaction to the irresponsibility of European governments that have not found an adequate response to the dying in the Mediterranean. Instead of creating safe and legal alternatives for people fleeing war, violence and exploitation, Europe is relying on deterrence and accepting deaths in the process.

Libya is not a safe haven

Until now, the Rescue Coordination Centre in Rome (MRCC) was responsible for operations between Libya and Italy. The cooperation with the MRCC has worked very well, the crew of the Aquarius reported. Since the end of June 2018 Libya has its own SAR zone (Search and Rescue), which has been recognized by the International Maritime Organization (IMO). Italy has handed over the coordination of the rescue operations to Libya. Europe supports the so-called Libyan coast guard logistically and with money: 46 million euros will flow to Libya until 2020 with the aim of "building up sea rescue capabilities": EU border security at all costs.

But is Libya a safe haven? Since the fall of Gaddafi in 2011, there is no functioning state in Libya, the country is falling into chaos. It is a torn civil war country in which rival parties are fighting for power and local militias dominate entire regions. Can Europe be responsible for leaving sea rescue to a civil war country like Libya, where the rule of law is not in place? In a country where migrant women are kept like slaves and sold on markets?

Fugitives describe their time in Libya as "hell on earth". What they experience can hardly be put into words: they are exploited, enslaved, raped or simply shot. The crew of the Aquarius documents the fates of the refugees. Their reports testify that there is one thing Libya is not: a safe haven. And also the experiences of the civilian rescue organizations show that the so-called Libyan coast guard wanted to prevent rescue operations in international waters offensively and with force of arms or is also responsible for deaths. The Libyan Coast Guard is often recruited from local militias, which themselves have contacts with tugboats.

Human lives are not negotiable

Furthermore, the helpers are subject to criticism and have to justify themselves for their work. Is there really a majority in the population that questions human rights and human dignity? Surveys show that 3 out of 4 people in Germany think it is right that civil society organizations rescue refugees in the Mediterranean. Opinions differ as to what should happen to the refugees afterwards. However, the figures show that solidarity and humanity are still the basis of our society. Aktion Seebrücke - a movement supported by various civil society actors - has brought several thousand people to the streets in over 100 cities to protest for the rescue of refugees in the Mediterranean.

Saving lives is not a crime, but our humanitarian duty. This is what we stand for as AWO International. That is why we support civil sea rescue. Human dignity is inviolable - this of course also applies to people who are on the run, regardless of the causes and reasons for their flight.

AWO International and AWO as a general association have been among the supporters from the very beginning: When SOS MEDITERRANEE was founded in 2015, Wilhelm Schmidt, Chairman of the Presidium of Arbeiterwohlfahrt, was one of the first signatories of an open letter in support of the initiative. He asked us to examine what possibilities AWO International has to support the sea rescue. Since then, AWO has been an institutional partner of SOS MEDITERRANEE. We are supported by our members and donors. 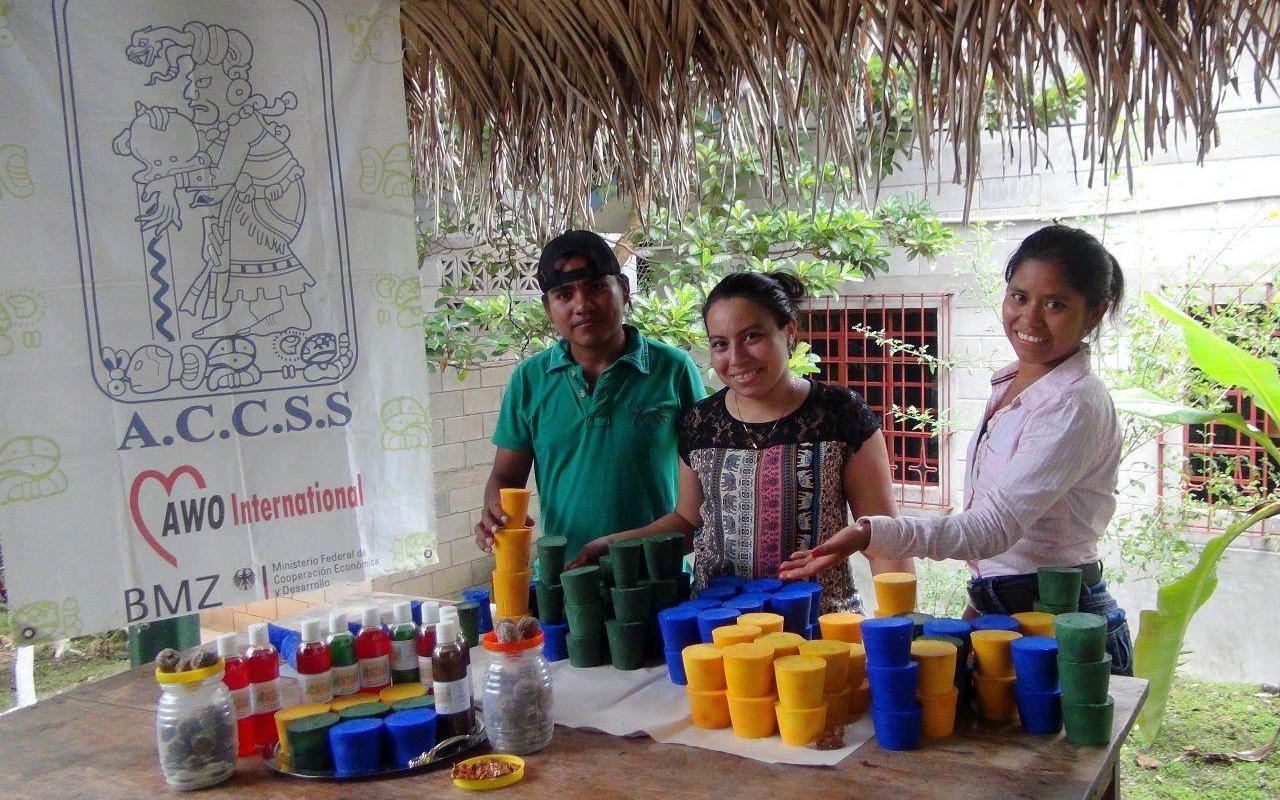